Who has the most capacity, fastest transfer speeds and the best pricing?

The full report follows and the quick answer is below

All 3 provide pretty much the same results.

Results of a previous test we did in June 2019

We posted the speed results of backing up to Azure Vs backing up to Wasabi in June and were pleased to see Wasabi was very quick and lightweight.
It got us thinking about how Backblaze’s B2 object storage compare to the other 2 cloud destinations. It’s also a perfect time to speed check Azure and Wasabi again 5 months after the previous bench test. Wasabi was displaying some awesome speeds back in June and their DC we tested is in Holland. We were worried they might have started to suffer some latency as their network usage and amount of data stored increased, so it seemed fair to check again.

For our test backup server, we are using Ahsay CBS version 8.3 and it is running in Azure’s data centre in London.

The client device running the backup is also in the UK (80 miles from the Azure DC).

The Wasabi location is in Holland (Amsterdam) and the Backblaze B2 destination in the US. The latter does skew the results somewhat because it is on another continent, but as the results show, this shows how responsive B2 is.

For our test, we are backing up approx. 1.6GB of generic data and our internet connection is approx. 6 Mbps upload. The data is compressing down to 426 MB which is a 75% compression rate. We expect to see compression rates of 40-90% on most types of data.
The Ahsay software will backup consecutively to each of the 4 backup destinations and every destination is its own data store with nothing shared. This means if one of the backup destinations suffers from loss of data or data corruption, the other 3 destinations are unaffected and can be used to restore from.

We have 4 basic destinations.

Backblaze B2 is object storage on Backblaze’ network in the US.

Wasabi is object storage in their Amsterdam data centre.

Local-1 is just a local backup to a NAS on the same LAN where the PC being backed-up is located. I have chosen this location to show how flexible the software is. We are using the local backup just to show the optimum results possible.

Wasabi and Azure are our pre-defined destinations which each reseller can select. 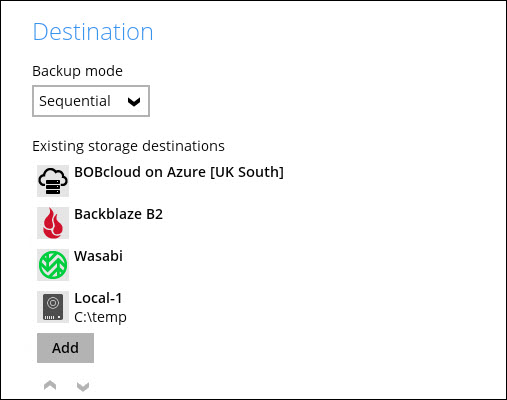 Resellers can create their own destinations and don’t have to use ours. Doing it this way will reduce costs considerably.
Wasabi destinations can be added using the pre-configured Wasabi connector or the generic S3 connector.

A Backblaze B2 destination can only be added by using the pre-configured B2 connector.
There is no definitive copy button on Backblaze’s site, so it was easy to partially copy the details incorrectly.
There is still no native S3 connector for the Backblaze’s B2 yet and they are still keeping it proprietary.

For our test, we are backing up approx. 1.6GB from the user’s Windows on the PC. This is the standard source selection window seen on Ahsay’s server application (OBM). 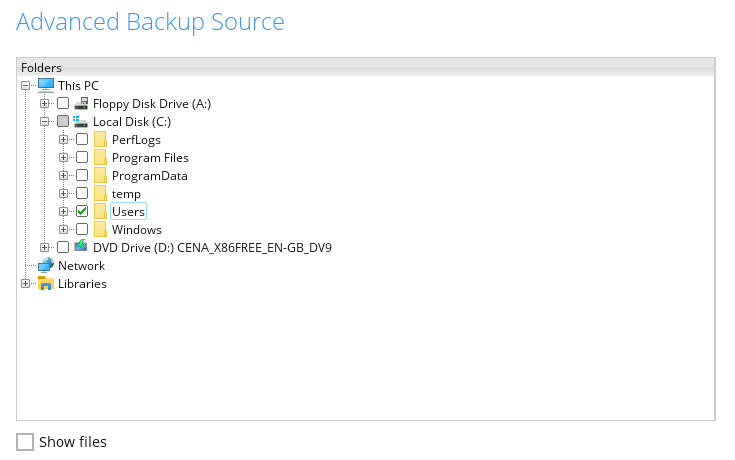 Because the results are expected to vary depending on when the test runs during the day, we ran the identical backup test at 2 different times throughout the day. The results are shown below with our comments below the bottom results.

A few things to consider about the results.

In the time we have been using Azure and Wasabi, we haven’t seen any reduction in performance. The results will show different transfer speeds, and these are reflective of the point-in-time the screen was captured and not the over speed.

Backblaze’s B2 storage is in the US and our test machine is in the UK. Taking into considerations the extra distance and latency, this brings B2 into line with the speeds experienced on Azure and Wasabi.

What speeds should be expected of a cloud backup or data transfer?

We didn’t test large data files and used generic office files we would expect to see on desktops and servers. This means the speed will be slower than if we transferred large files.

Experience tells us that large files, such as a Hyper V disk which might be 5TB in size will transfer at approx. twice the speed than 5TB of regular files would transfer, and sometimes 5 times as fast as 5TB of very small files (less than 200K). The reason is how data transfers would for online backups.

On a LAN based transfer, data can move around the network without hinderance and the applications don’t need to consider potential network congestion or latency. This is handled by routers and switches with the packet size, type of transfer and MTU sizes managed. Network admins might need to play around with MTU sizes when routing traffic between networks over the internet or a leased line, but that is about it. If desktops need to connect to remote networks, then thin-client technology is used because it is expected there will be limited bandwidth to run regular ‘fat’ client-server APPs.

Online backup software is expected to run on very low bandwidth connections to the internet and all providers will have grown up with Kbps speeds and the software will be written specifically to handle these situations.

Online backup software will check every file encountered with the pre-flight checks will be something like this:

When this process is run on the 5TB Hyper V disk we mentioned earlier, steps 1 and 2 are done once.
If we repeat this on 5TB of very small files , the overhead in steps 1 and 2 is greater because it is repeated approx. 25,000 times in our example.

These factors all have an impact on the backup and restore speeds. There is no way to estimate backup times other than rigid benchmarking on customer’s environments.

Backblaze’s price and feature comparisons are between B2, Azure, AWS and Google cloud. They don’t mention the significantly lower pricing of Wasabi (even though they both operate from Amsterdam in Holland. Wasabi is the same price as B2, but more importantly, don’t charge an egress cost. Backblaze 2 charges a 200% mark-up on storage per GB of data stored. This still leaves them on the bracket of ‘it is too expensive to leave’. Checkout anytime you like, but never leave.

1TB of storage on the 3 services based on 13/11/2019 pricing is split into 2 comparisons; the cost of uploading and storing the data, Vs the cost of retrieving the data during a restore (egress).

Microsoft Azure blobs
We have shown the cost to transfer 1TB of data to Azure and store it. Our calculation is based on LRS (one data centre), cool storage (used for data infrequently retrieved) and we haven’t shown pricing for other transactions which the other providers don’t charge for (write, read list etc operations).

Backblaze B2
Their pricing is a lot easier to understand than Microsoft’s and there aren’t any hidden costs.

Wasabi
Their pricing is a lot easier to understand than Microsoft’s without any hidden costs.

Overall, the Azure and Wasabi transfer times were the same between the 4 backups we used in our test.

Wasabi allows you to download 100% of your storage size per month and this should be more than enough for streaming or bulk download sites.

The devil is in the detail because gotchas are included and you might find your data locked at a data centre and you can’t afford to move it.
Wasabi will charge for 3 months storage on every object even if it is deleted shortly after being created. Azure has a whole suite of extra API charges and their egress charges mean you might not be able to afford to move your data to another cloud.